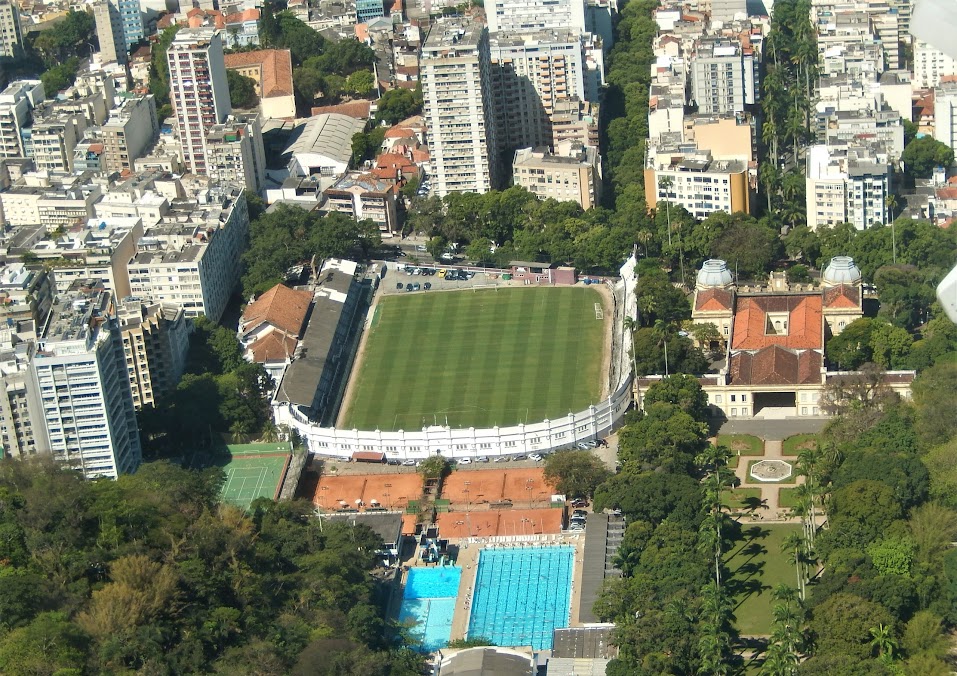 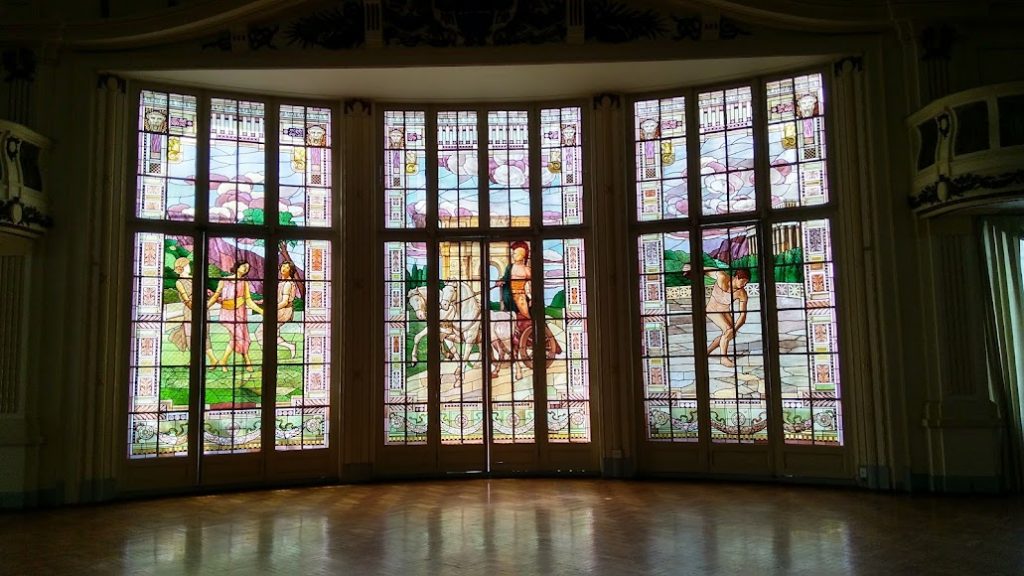 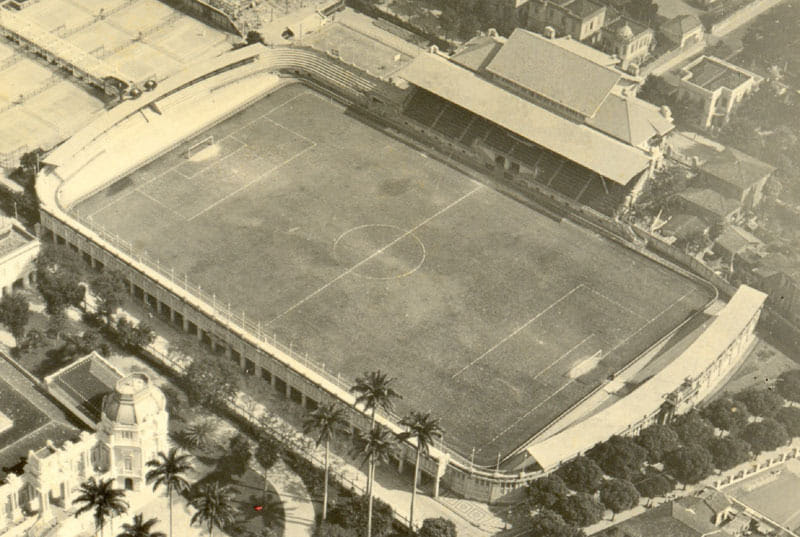 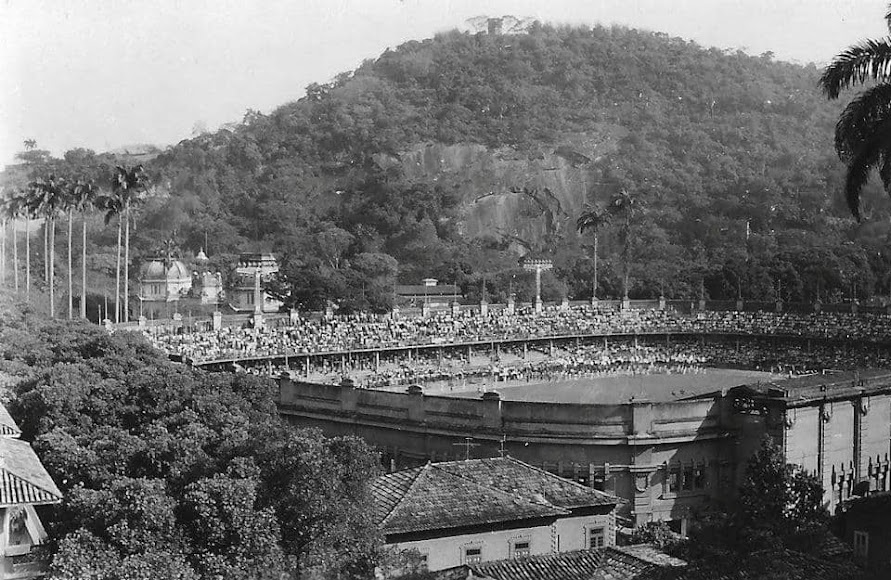 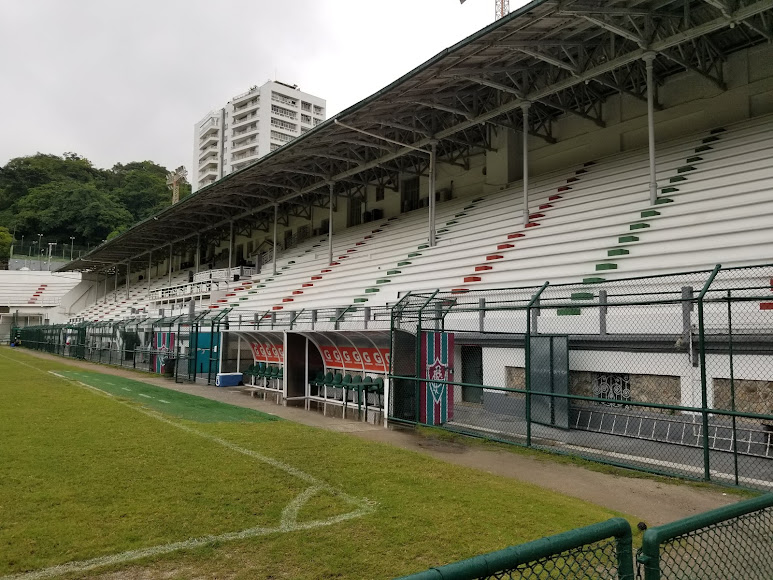 Guanabara Street Field
On August 14, 1904, the first interstate game was played at Campo da Rua Guanabara, which was in the same location as Estádio das Laranjeiras, only with the lawn in a different position, against Paulistano.

This was the inaugural game of the new sports square in Rio de Janeiro and the board of Fluminense ordered the construction of a small wooden bleacher to accommodate the public, charging the first tickets for a football game. The old Rua Guanabara is the current Rua Pinheiro Machado.

In addition to Fluminense members and guests present, there were 806 cards passed by members and 190 tickets sold to non-members at the box office, with tickets costing $2000 and an estimated income of 1:992$000.

In 1905, Eduardo Guinle built, on his own, the first bleachers on football fields in Rio de Janeiro. With this improvement completed, the rent tripled.

That same year, through a loan made between the partners, the first headquarters was demolished and the second built.

On July 21, 1914, Fluminense’s 12th anniversary, the first match of the Brazilian National Team was played at Campo da Rua Guanabara, on the initiative of Fluminense and Paysandu, which sponsored the arrival of professional players from Exeter City, England, to Rio de Janeiro, with a ticket charge of 4$000 for the stands and 3$000 for the entry of other spectators, with the final result being a 2-0 Brazilian victory, with goals from Oswaldo Gomes, the first, and Osman .

The inauguration of the third headquarters, on July 27, 1915, was highly celebrated, culminating with a ball at the skating rink, when the first Fluminense anthem, by Paulo Coelho Netto, was sung.

Still in 1915, President Cunha Freire built a private stand for the members and their families. The expansion plan was completed with the construction of a new rink, purchase of furniture, electrical installation, increase in bleachers and construction of general ones.

In 1918, the renovations that will give rise to the fourth headquarters of Fluminense begin. The works ended in 1920, under the presidency of Arnaldo Guinle, who hired the Catalan architect Hipolyto Pujol to design the premises. With Belgian stained glass windows and crystal chandeliers, the Salão Nobre became the stage for many shows, balls, parades, operas and ballet.

It is still widely used today for parties, meetings and film recordings such as Anos Dourados, Dona Flor and her two husbands, Villa Lobos, telenovelas and commercials. The headquarters is owned and today is listed as a historical heritage.

Inauguration of the Laranjeiras Stadium
On May 11, 1919, the Estádio das Laranjeiras, owned by Fluminense Football Club, was inaugurated with the match between Brazil and Chile. This was the first stadium built in Brazil for large shows, with a capacity for 18,000 spectators. Brazil won the match 6-0 and, at the end of the South American National Team Championship, in a decision against Uruguay, the Brazilian team won its first relevant international title.

Fluminense’s first match at Estádio das Laranjeiras was in the 4-1 victory over Vila Isabel on July 13, 1919, in a match valid for the Campeonato Carioca, with the tricolor goals having been scored by Welfare (3) and Machado.

In 1922, the Estádio das Laranjeiras had its capacity increased to 25,000 spectators, to host two large events commemorating the Centenary of Independence of Brazil, the Latin American Olympic Games (precursor of the Pan American Games) and the South American Championship. American National Team, that year, also won by the Brazilian team, this being the second relevant international title of the canarian team.

In two of the matches, against Chile and against Uruguay, the audience was estimated at 30,000 people. In the final, Brazil beat Paraguay 3-0.

On October 1, 1922, the first radio broadcast of a football match in the history of Uruguay took place. Directly from Laranjeiras, the match between the national teams of Brazil and Uruguay was broadcast to the neighboring country, through cable transmissions, also identified as the first transmission of a football game by a radio station in the world.

In some games, this stadium had estimated audiences larger than its capacity, but apparently the record for paying audiences for this stadium was in the Fluminense 3-1 Flamengo match, on June 14, 1925, when 25,718 spectators paid for tickets, although on today, the audience for the match between Fluminense and Sporting Clube de Portugal, held on July 15, 1928, in the Vulcain Cup, is unknown, with the stadium full and over 2,000 seats being placed on the athletics track to accommodate the audience present .

Christ the Redeemer, inauguration mass in Laranjeiras
The Brazilian team played 18 games in its first home, winning 13 and drawing 5, between