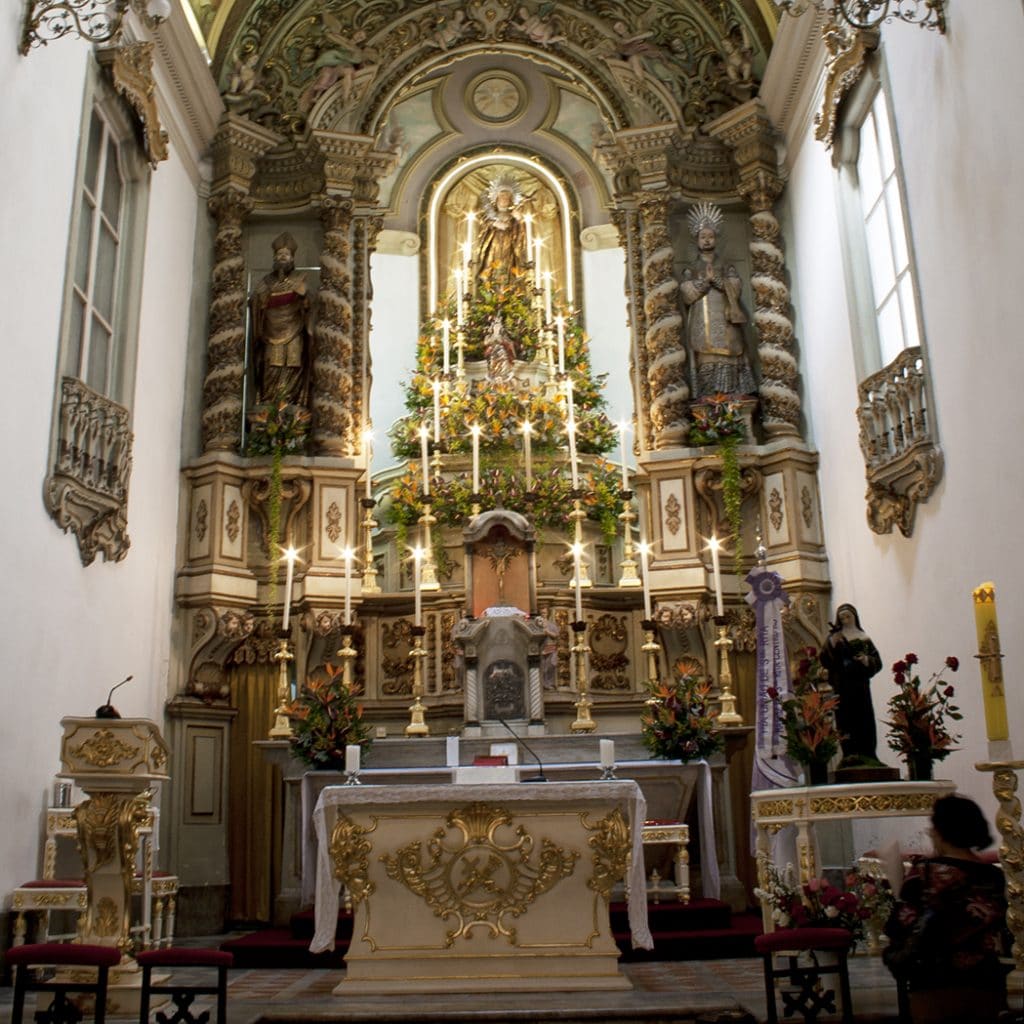 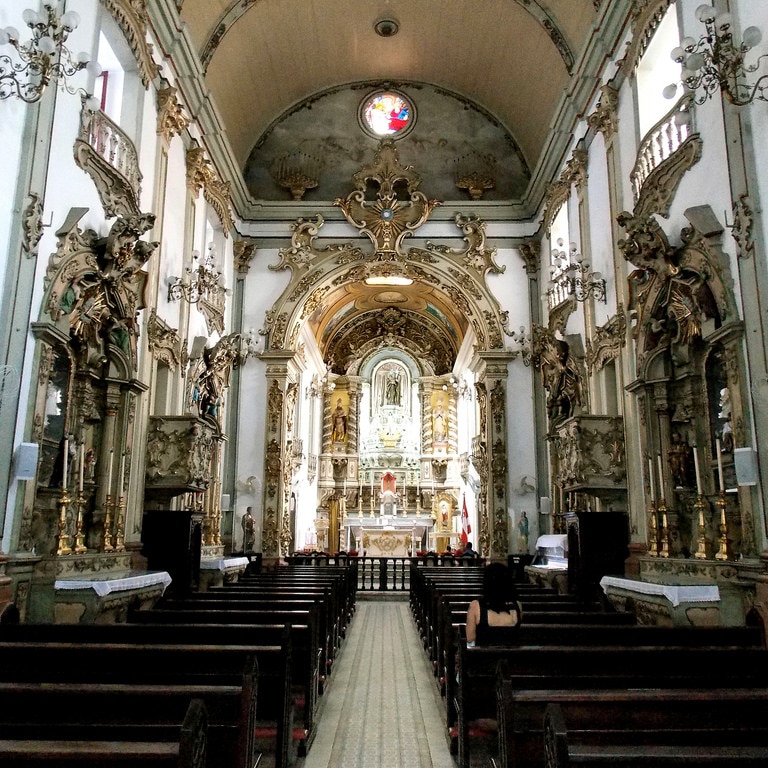 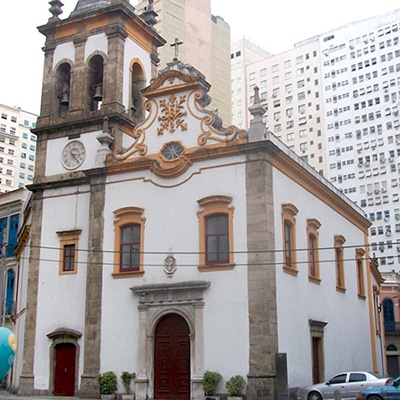 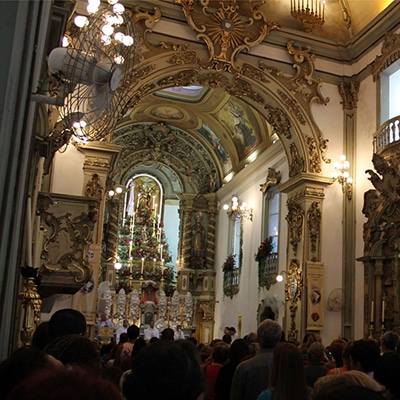 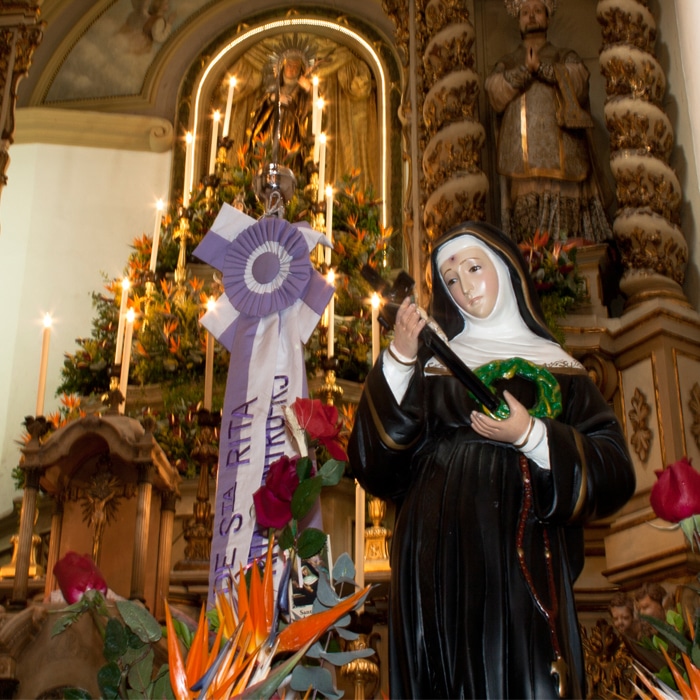 In the center of Rio de Janeiro, more precisely in Largo de Santa Rita, on the corner with Rua Miguel Couto, is the Parish Church of Santa Rita. The Temple challenges, with its simple and beautiful facade, the grandeur of the local buildings. It is a harmonious confrontation between the Baroque-Rococo style of the 18th century and the boldness of modern architecture.

The Church has a simple facade, next to the sidewalk, with expressive Baroque details. Inside, there is a small atrium under the choir, with, on the left, a baptistery, a marble baptismal font and an oil painting with the baptism of the Lord Jesus, and on the right, an image of Santa Rita and, on each side at the entrance, a small marble sink. The rectangular nave has side walls with pilasters that extend to the cymbal with the arches of the vaulted ceiling, which features beautiful panels.

At the back of the nave, the majestic altar with the patron saint’s throne, in the side niches two pairs of twisted columns, which keep the image of Saint Augustine, on the left, and that of Saint Andrew Avelino on the right. The vaulted ceiling features a central skylight and three beautiful panels on each side, with the same symbolism as the nave.

In the segment on the left, there are the secretariat and the sacristy. In this, there is, on the left, the historical source much sought after in the past for the miraculous cures of eye diseases; on the right side, you can see a niche that keeps the primitive image of Santa Rita de Cássia (1750) and a beautiful Portuguese marble washbasin.

The cult of Santa Rita de Cássia began in Rio de Janeiro before 1710, when the Portuguese nobleman Manuel Nascentes Pinto, his wife Da. Antônia Maria and their son Inácio arrived here. He came on a mission given by the King of Portugal, D. João V. The couple brought from their homeland a beautiful painting of Santa Rita de Cássia, Saint of their devotion, who for several years had been worshiped in the manor of the farm, which was on the edge from the current Rua Teófilo Otoni to the vicinity of Morro da Conceição. Of great virtues and very simple, every year, on May 22, the Portuguese nobles gathered many religious in the manor residence, for the veneration of the Saint of devotion, the whole city was invited. In a short time, he decided to expand the place of worship, building a Chapel on the property (current Church of Santa Rita) and ordering from Portugal a rich image of the saint (this one still on the altar), kept in the Church of Candelária while the small temple, whose cornerstone was laid in 1720. Such was the increase given by the nobleman Nascentes Pinto, who paid for everything, that a year later, in 1721, the chancel, sacristy and consistory of the Church were already ready. At that time, the Brotherhood of Santa Rita de Cássia was also created, which took over the administration of the Church on May 13, 1721, in this document, the benefactor reserved for himself the patronage of the Church, until then private property. This fact opened a prolonged demand, as Bishop D. Francisco de S.Jerônimo, who laid the cornerstone of the Church, refused to recognize such an attempt, claiming that only the King of Portugal could be patron of the Churches in Brazil. With the death of the benefactor, his son Ignatius, the quarrel with the Bishop continued. In 1741, at the insistence of the Bishop and threats of even excommunication, the heir Inácio Nascentes Pinto was forced to give in, handing over the Temple to Mitra, but continuing the matter. One day, a serious illness struck Ignatius, leaving him paralyzed, speechless and deaf. Deeming it a punishment from heaven for his litigation with Mitra, the heir appealed to Santa Rita, promising to settle the matter if he was cured. After a few days, Inácio had all movements and senses restored, walking again. He passed away some time later, having passed on to his children the determination not to come into conflict with Mitra again.

The Temple was elevated to the status of Mother Church on January 30, 1751, with the creation of the Parish of Santa Rita. Capacity is 250 seated faithful. The Parish maintains a social work, monthly distributing basic food baskets to 150 registered families. The temple keeps relics of Santa Rita de Cássia and Santo Lenho, being listed by the National Historical and Artistic Heritage Institute (IPHAN).