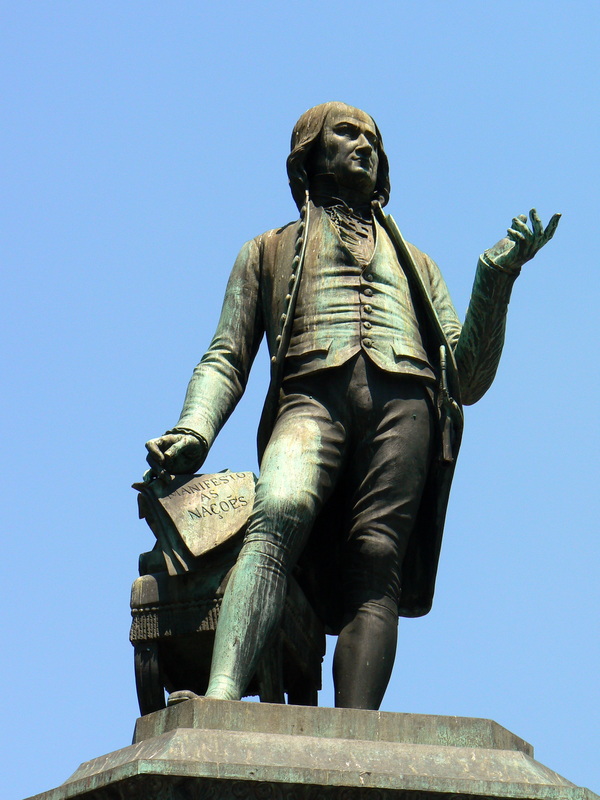 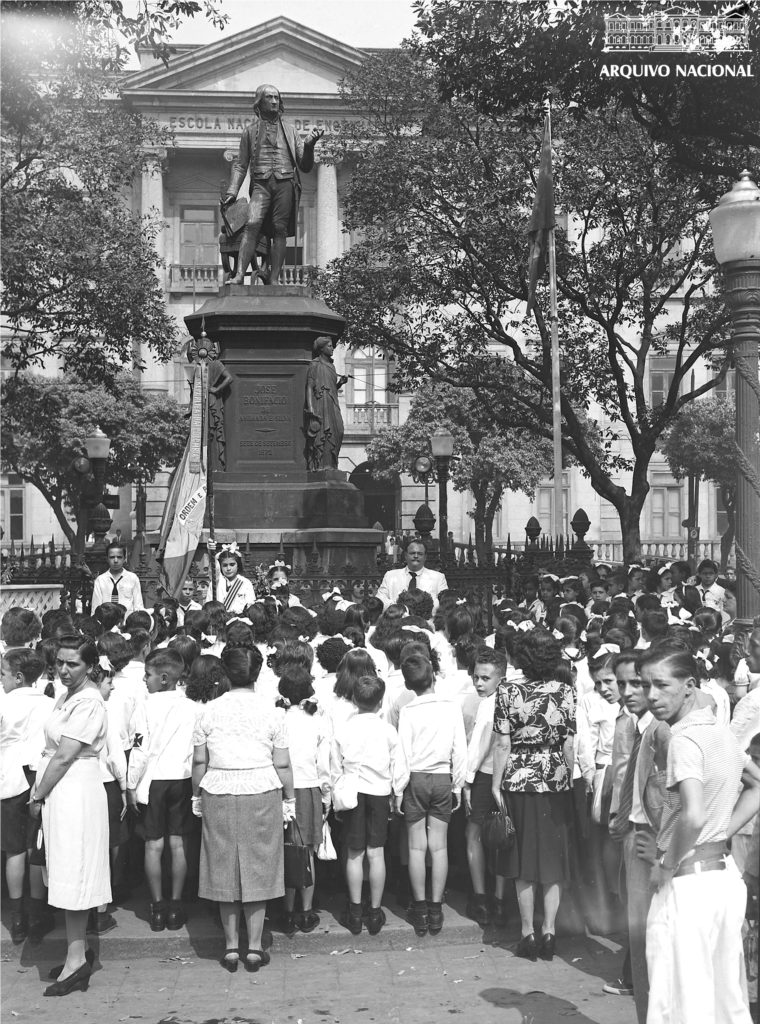 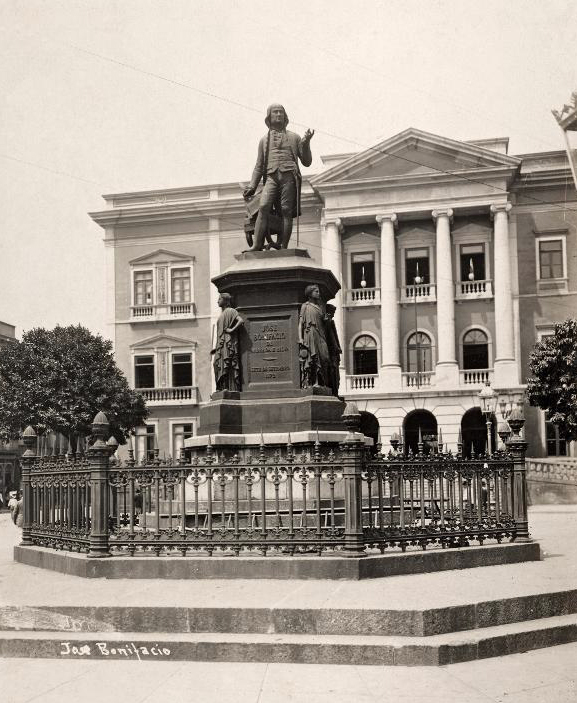 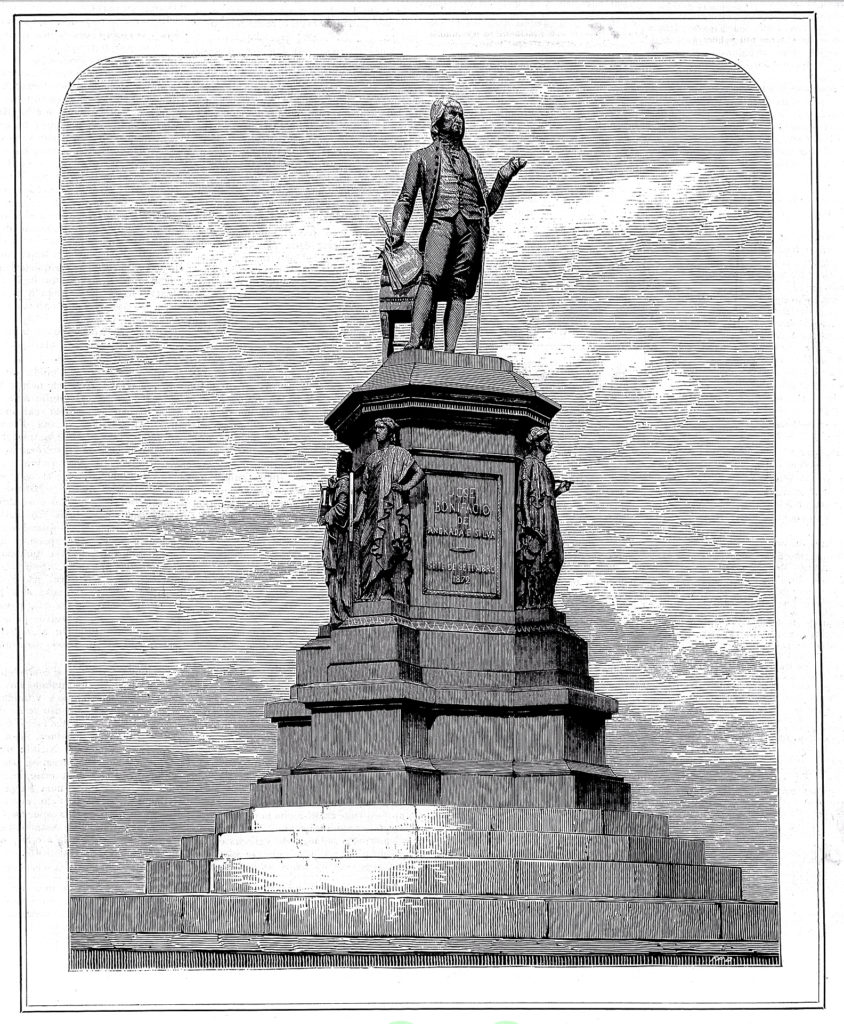 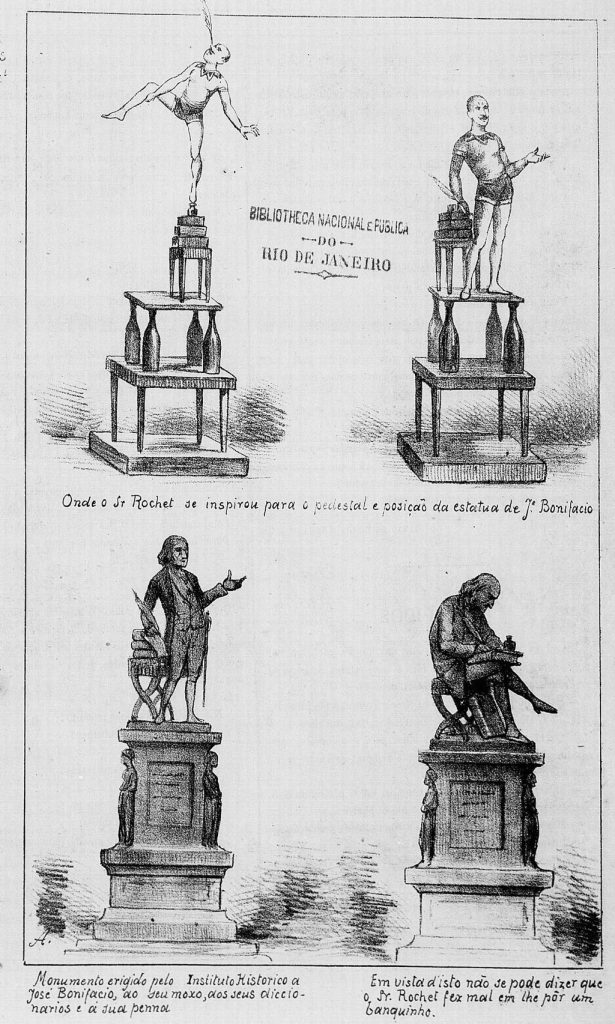 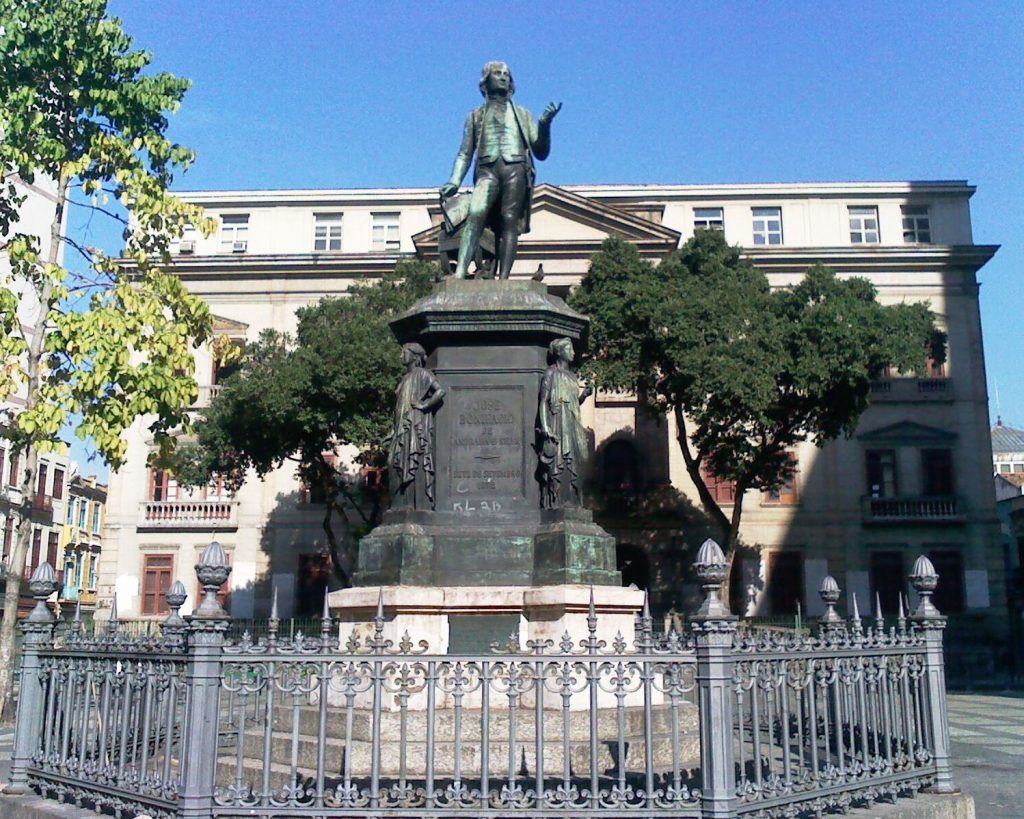 In 1800, Andrada e Silva was appointed professor of geology at Coimbra, and soon after inspector-general of the Portuguese mines; and in 1812 he was made perpetual secretary of the Lisbon Academy of Sciences. Returning to the colony in 1819, he urged Dom Pedro I to resist the recall of the Lisbon court, and was appointed one of his ministers in 1821. When the independence of Brazil was declared, Andrada e Silva became minister of the interior and of foreign affairs; and when it was established, he was again elected by the Constituent Assembly. He was also the author of the abolition project in Brazil, presented to the Constituent Assembly in 1823. But his democratic principles resulted in his dismissal from office in July 1823.

Career in Europe
José Bonifácio spent part of his life in Europe. In his travels around Europe he studied chemistry and mineralogy with other scientists. He collected data, carried out scientific experiments and discovered four new minerals and eight previously unknown species. The mineral andradite is named for him. Among his other discoveries was petalite, a lithium-containing material, first discovered by Andrade toward the end of the 18th century on a trip to Sweden; it was in this mineral that Swedish chemists first discovered lithium. He also was the first to discover another important lithium-containing mineral, spodumene, from the same source, the island of Utö in the Stockholm Archipelago of Sweden.

In 1797 he was elected a foreign member of the Royal Swedish Academy of Sciences.

Graduated in Law and Natural Philosophy in Coimbra, he joined the Academia das Ciências de Lisboa (Science Academy of Lisbon). He taught Geognosy at the University of Coimbra in Portugal. Knowing twelve languages, he could speak four.

Return to Brazil
In 1819, he travelled back to Brazil where he continued to conduct scientific research. A talented man having an unquiet temperament, he was also appointed Minister for Kingdom and Overseas Affairs and became the de facto prime minister.

His relationship with the prince became incompatible and he decided to join the opposition. In 1823 he was exiled and went to live in Bordeaux where, in 1825, come out his “Poesias Avulsas” (Sundry Poetries). To publish them he used the pseudonym Américo Elísio. On the dissolution of the Assembly in November (the Night of Agony), he was arrested and banished to France, where he lived in exile near Bordeaux until 1829, when he was permitted to return to Brazil.

José Bonifácio de Andrada e Silva, the Patriarch of the Independence of Brazil, by Benedito Calixto
In 1831 when Dom Pedro I abdicated from the throne, he was appointed by the former Emperor to be the tutor of the Emperor’s son. Since he did not agree with the Regent’s government he tried to reestablish the Empire. After being again arrested in 1833 and tried for intriguing on behalf of Dom Pedro I, he passed the rest of his days in retirement at the city of Niterói.[1] He lost his duties of tutor and was accused of being a traitor, but he was eventually pardoned.

In December 1836, he contracted tuberculosis. He died of the disease on 6 April 1838 in Niterói.

Career in literature
José Bonifácio had also been engaged in Literature. His work Poesias Avulsas that come out in Bordeaux were republished in Brazil, in 1861, by the publisher Laemmert. In Brazil it received the title “Poesias” (Poetries) and the publication had the coordination of Joaquim Norberto de Sousa. In 1942 Afrânio Peixoto prepared another issue through the Brazilian Academy of Letters. This work, prefaced with a text by Sérgio Buarque de Holanda, was also published in a collection, as Volume I, idealized by the “Instituto Nacional do Livro” (The National Book Institute), appearing in 1946 with the title Poesias de Américo Elísio [Américo Elísio’s Poetry]. His poetry shows a naturalistic pantheism that expresses his intellectual character and scientific curiosity.

His scientific, political and social works are published in Volume III, compiled and reproduced by Edgar Cerqueira Falcão with the title Obras científicas, politicas e sociais de José Bonifácio de Andrada e Silva. Its third edition came out in 1963 to celebrate the bicentennial of the Patriarch of the Independence.

The mineral andradite was named after José Bonifácio.

Rio de Janeiro, July 12, 1861. The members of the Instituto Histórico e Geográfico Brasileiro (IHGB) were meeting for another ordinary session, where they would discuss the proposals for actions for the following years. One of them would be to have a statue erected in the capital of the Empire in honor of the councilor José Bonifácio de Andrada e Silva, Minister of the Interior and Foreign Affairs in 1822, who had the glory of carrying out the Independence of Brazil at that time.

It was also decided in that session that they would have a worthy tomb built in the city of Santos for the mortal remains of the honoree, a proposal made by Cláudio Luís da Costa (who had been provider of the Santa Casa de Misericórdia de Santos between 1836 and 1838). He said: “I propose that the construction of a tomb in the place where his body is buried, and where until now there is not a stone to mark this tomb be added to the indication of the erection of the statue to José Bonifácio de Andrada e Silva”. It was agreed that such works should be carried out through popular subscriptions collected throughout the Empire, emphasizing the purpose of preserving the character of national recognition. (It is important to note that the proposal for the tomb was not carried out due to the Santos Chamber having other plans for the remains of Bonifácio. The current Pantheon of the Andradas, however, only came to fruition in 1923)

At the end of the meeting, the members of the IHGB came together to form a commission to carry out the honorable task. And so, she was appointed by the president of the institution, Mr. Cândido José de Araújo Viana, the Marques de Sapucaí, with the following composition:

President – ​​Eusébio Queiroz Coutinho Matoso Câmara (he was the author of one of the most important laws of the Empire, the Eusébio de Queiroz Law, of September 4, 1850, which prohibited the slave trade to Brazil); Secretary – Joaquim Norberto de Sousa Silva (writer and historian – would become president of the Brazilian Historical and Geographical Institute from 1886 to 1891); Treasurer – Irineu Evangelista de Souza (the famous Barão de Mauá, responsible for the construction of the first Brazilian railroad, in 1854, among many other activities); Members – Councilor Thomas Gomes dos Santos (former president of the Province of Rio de Janeiro, in 1858); Fernando Sebastião Dias da Motta, Colonel Henrique de Beaurepaire Rohan (Viscount); Dr. Claudio Luís da Costa (one of the most important providers of Santa Casa de Santos); Dr. José Ribeiro de Sousa Fontes (baron and viscount) and Dr. João Manoel Pereira da Silva (Senator).

Eusébio de Queiroz, first president of the Organizing Committee for the erection of the statue in honor of José Bonifácio.

To carry out the task, the IHGB Commission sent a circular to all the Municipal Councils of the Empire, opening a competition for the exhibition of plans for the claimed monument. Initially the idea was that the statue would be produced by national artists. However, the few works presented did not encourage the members of the commission, who ended up withdrawing from the competition and hiring a more qualified professional. The choice fell on the French statuary Luiz Rochet, a veteran artist disciple of David de Angers (author of the famous monument to Gutemberg, the father of the press, in the French city of Strasbourg), who was in the Brazilian imperial capital. Rochet had produced a beautiful monument in Rio de Janeiro depicting Emperor D. Pedro II on horseback (the first equestrian monument in the city), which had been inaugurated in 1862.

Thus, the members of the Commission, Thomas Gomes dos Santos, Joaquim Norberto de Sousa e Silva and Fernando Sebastião Dias da Motta, looked for the statuary and instructed him on the monument’s plan and the artistic conditions that should be kept in it. In addition to the representatives of the IHGB, he also participated in meetings with the French artist, the secretary of the Academy of Fine Arts of Rio de Janeiro, J. Maximiano Mafra.

Paralyzed by the War

Everything was going well until, in 1864, the Paraguayan War broke out in the south of the country. The conflict lasted six years and left more than 300,000 dead. Because of the war, the José Bonifácio project was suspended. In addition, during this period, three members of the committee died: the president of the Commission, counselor Eusébio (05/07/1868), in addition to Dias da Mota (01/04/1869) and Claudio Luís da Costa (05/27/1869). ).

After the end of the Paraguayan War, the Instituto Histórico e Geográfico Brasileiro convened the Commission again, holding a new meeting on June 14, 1871, when the president of the same was replaced, with the appointment of Viscount do Bom Retiro, Luís Pedreira do Couto Ferraz, and in the composition of the vacancies left by the other deceased, Drs. Francisco Ignácio Marcondes Homem de Mello (who would become Baron Homem de Melo) and Joaquim Manoel de Macedo (physician, journalist and historian).

Once the group was rebuilt, all that remained was to find the Rochet statuary, who had returned to his homeland. Thus, the Viscount of Bom Retiro, on behalf of the Commission, sent the contract to Paris for the artist who, as soon as he signed it, began his work, seeking to complete the work as soon as possible, since the idea was to inaugurate it. on September 7, 1872, on the fiftieth anniversary of Independence from the Empire.